Webinar
If you are interested in participating to the informative webinar with the Programme Director on October 14th 2021 at 5:30 p.m., please fill this form: https://forms.office.com/r/CjsNT5pGyq
Contacts at Politecnico di Torino
For questions regarding application procedure, admission requirements and scholarships:
Specializing Masters Programmes and Lifelong Learning School, e-mail: master.universitari@polito.it, phone: +39 011.090.3315
For enquiries on the educational programme and partnerships:
Master’s Scientific Secretariat, e-mail: mastercc@polito.it
In-person graduation session
13/07/2021
On Monday, 12th July 2021 the first in-person graduation session after one year has been held. 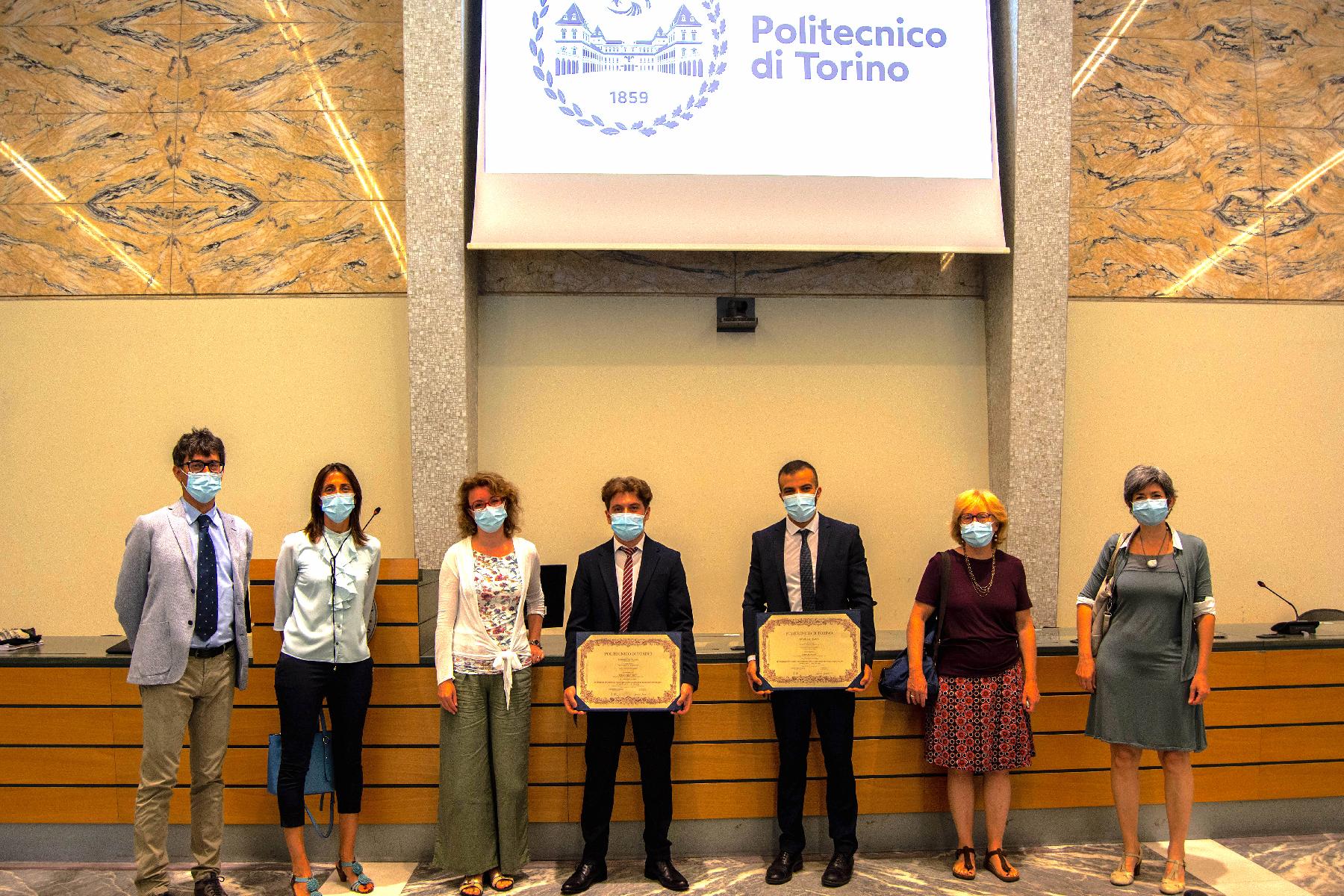 22 June, 2-3 pm Italian time | Petroleum and Mining Engineers in the era of Energy transition
Chair: Prof. Francesca Verga
Language: English
The video is now availableon demand here.
Speakers:
Morgane Alleoud - Master degree obtained at the engineering school of geology of Nancy ENSG (Ecole Nationale Supérieure de Géologie, France). Currently he is the mine geologist of an underground mine of talc in Piedmont (Italy).
In this underground mine he is responsible for the mine planning (short and long term), supporting the production team and the Reserves and Resources assessment and reporting.
Maria Giulia De Donno - She has recently completed her MBA at SDA Bocconi and she is working as Senior Associate Consultant in a top mgmt. consultancy company. In her past Giulia has developed her professional experience as a planner and coordinator of complex O&G operations, with a proven record of accomplishment across multiple client accounts, companies and geographic areas. She is an Alumna of PoliTO and in SPE, she is the YP Chairperson of SPE Italy.
Giorgio Russo - He holds an MSc cum laude in Petroleum Engineering (2016) at Politecnico di Torino with an experimental thesis developed at Istanbul Technical University. As a fresh graduate, he worked for ExxonMobil as a Project Engineer coordinating the execution phase of several refinery projects in Sicily. Afterwards, he joined Eni by attending the 2nd Level Specializing Master in Petroleum Eng & Ops at Politecnico di Torino. At Eni HQ in Milan, he has been working as a Reservoir Engineer on multiple topics (well performance and production optimization, virtual metering, reservoir simulation) applied to Eni assets worldwide.
Matteo Trevisan - He is a Production Engineer working for Eni at the COVA plant in Basilicata, Southern Italy. He serves as Liaison Sections in the SPE Italian Section Board and as First Term Coordinator of the Beyond the Borders 2021 Committee. He holds a Chemical Engineering degree at University of Padua and a Specializing Master in Petroleum Engineering at Politecnico of Turin.
Diego Zurolo - General Manager and CEO in Lochaline Quartz Sand Limited (owned by Minerali Industriali Srl), producer of a high-quality silica sand for glass market.
He has a master degree in Environmental and Land Engineering, specialization in geoengineering, achieved at Politecnico di Torino in 2012 and a master in business administration achieved in 2018 at Bologna Business School.
He worked for Minerali Industriali Srl in several sites around the world from 2012 to 2014; in 2014 he was appointed as Mine Manager for Lochaline Quartz Sand Ltd. In January 2019, he was appointed as General Manager of Lochaline Quartz Sand Limited and director for the UK based mining operations.
Massimiliano Giamberini - Reservoir Engineer at Eni in Milan HQ supporting the USA and Venezuela BUs for technical studies. He serves as Liaison Faculty in the SPE Italian Section Board and he is a member of SPE International Membership Committee. He holds an Energy Engineering degree at Polytechnic University of Milan and a Specializing Master in Petroleum Engineering at Polytechnic University of Turin.
Open Days 2021
04/05/2021
The OPEN DAYS of Politecnico di Torino will be held online from 26 to 28 May 2021, dedicated to the Master’s degree courses.
Three days of meetings with teachers, university students and guidance experts.
An opportunity to discover all the services, special projects, student teams and much more.

Here are the DIATI appointments:
- 26 May 2021, 11.00 (Italian time): Presentation of the Master’s degree in Environmental and Land Engineering (in English)
- 26 May 2021, 13.00  (Italian time): Presentation of the Master’s degree in Petroleum and Mining Engineering (in English)
- 27 May 2021, 12.00 (Italian time): Presentation of the Master’s degree in Environmental and Land Engineering (in Italian)
To participate in the live session click here!
VIRTUAL CLASSROOM dedicated to prospective students' orientation
update 03/05/2021
Starting from February 25, 2021 and for every following Thursdays, from 2.30 to 3.30 pm (Italian time),
DIATI opens one of its VIRTUAL CLASSROOM for future students and for all those who are deciding about their studies.
This is a great opportunity to ask questions about lessons, exams, planned teachings, on the proposed internships and future career opportunities of the Bachelor’s and Master’s degree programmes in Environmental and Land Engineering and on the Master’s programme in Petroleum and Mining Engineering, to the coordinator of the study programmes, Professor Socco.
To connect to the Virtual Classroom click on this link and type you name on “Accedi come ospite”.
QS World University Rankings by Subject
08/03/2021
Politecnico di Torino is in the global top 40 Universities in the field of Engineering and Technology in the latest QS World University Rankings by Subject 2021.
The ranking takes into consideration over 1200 universities and scientific institutions, analyzing individual disciplinary areas.
Petroleum Engineering and Mining Engineering performed event better, ranking 15th and 37th respectively.
Mineral & Mining Engineering ranking
Petroleum Engineering ranking
QS World University Rankings
04/08/2020
The QS World University Rankings recently introduced #petroleumengineering in their rankings by subject and Politecnico di Torino ranked 14, the only Italian university and the third EU top university listed in this subject. Go to the Petroleum Engineering Ranking page.
SPE/EAGE/ASSOMIN "Gustavo Sclocchi" Theses Award 2019
12/06/2020
SPE Italian Section together with EAGE and Assomineraria announce the winners of the 2019 edition of the “Gustavo Sclocchi” Theses Award. Three alumni of Politecnico di Torino have been awarded:
Categories Bachelor of Science & 2nd Level Master:
Special mentions:
Open Days Polito 2020
19/05/2020
The Politecnico di Torino organized the online OPEN DAYS from the 25 to the 29 of May  2020: five days of meetings with professors, students and orientation experts, plus the possibility to follow the presentation of 23 Bachelor and 30 Master Degrees. Live Open Days are now over but contents remain available online and you can benefit of extra initiatives promoted by our degree and master courses.
MEET THE FACULTY